An original drawing from the popular Tintin adventure Explorers on the Moon has sold for a record €1.55m (£1.3m) in Paris, auction house Artcurial has announced.

The 50cm x 35cm drawing in Chinese ink by the Belgian cartoonist known as Hergé shows the boy reporter, his dog, Snowy, and sailor Captain Haddock wearing spacesuits and walking on the moon while looking at Earth. It had been expected to sell for between €700,000 and €900,000.

“It’s simply fantastic. It’s an exceptional price for an exceptional piece,” said Artcurial’s comics expert, Eric Leroy. He described Explorers on the Moon as “a key moment in the history of comic book art ... it has become legendary for many lovers and collectors of comic strips”. 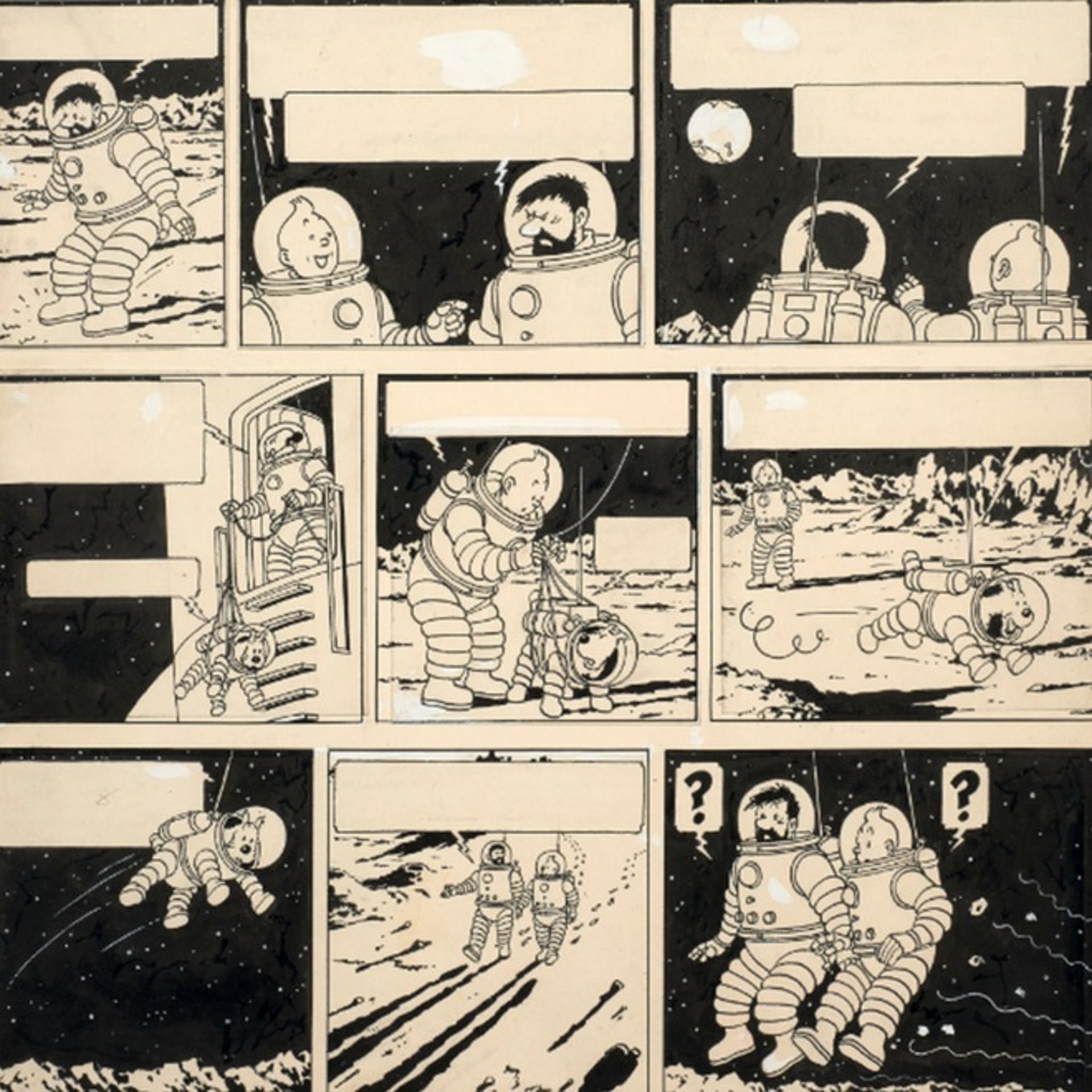 Leroy added: “It is one of the most important from Hergé’s postwar period, on the same level as Tintin in Tibet and The Castafiore Emerald.” The 1954 book is viewed as one of Hergé’s masterpieces.

Saturday’s sale was a record for a single cartoon drawing. In 2012, the 1932 cover illustration of Tintin in America fetched €1.3m.

Hergé already holds the world record for the sale of a comic strip. A double-page ink drawing that served as the inside cover for all the Tintin adventures published between 1937 and 1958, sold for €2.65m to an American fan two years ago.

Original Tintin comic book drawings have been fetching millions at auctions in recent years. In February 2015, the original cover design for The Shooting Star almost matched the record when it was sold for €2.5m.

In May the original artwork for the last two pages of the King Ottokar’s Sceptre book sold for $1.2m (£1m), while in October 2015, a double-page slate from the same Tintin book fetched more than €1.5m. That same month, an Asian investor paid $1.2m for a drawing from The Blue Lotus book, published in 1936, of Tintin and Snowy in Shanghai.

Alongside the moon drawings, Artcurial also sold 20 ink sketches Hergé created for a series of new year greeting cards known as his “snow cards”. The drawings, including Tintin and Snowy skiing, or hapless detectives the Thompson twins ice-skating, brought in €1.2m.

Prices for cartoon art have multiplied tenfold in the last decade, according to gallery owner Daniel Maghen.

The 1954 Explorers on the Moon completes the lunar adventure started in Destination Moon (1953).

The sales come as Tintin-mania again grips Paris, with Hergé the subject of a huge retrospective exhibition at the Grand Palais.

More in this category: « Annesley 70’s show on Dec. 04 Sarpaya to unveil 6 books tomorrow »
back to top

Top US delegation to visit tomorrow

Another obstacle for the 21st Amendment!