Amanda Gorman has become the youngest poet ever to perform at a presidential inauguration, calling for "unity and togetherness" in her self-penned poem.

The 22-year-old delivered her work The Hill We Climb to both the dignitaries present in Washington DC and a watching global audience.

"When day comes, we ask ourselves where can we find light in this never-ending shade?" her five-minute poem began.

She went on to reference the storming of the Capitol earlier this month.

"We've seen a force that would shatter our nation rather than share it, would destroy our country if it meant delaying democracy," she declared.

"And this effort very nearly succeeded. But while democracy can be periodically delayed, it can never be permanently defeated." 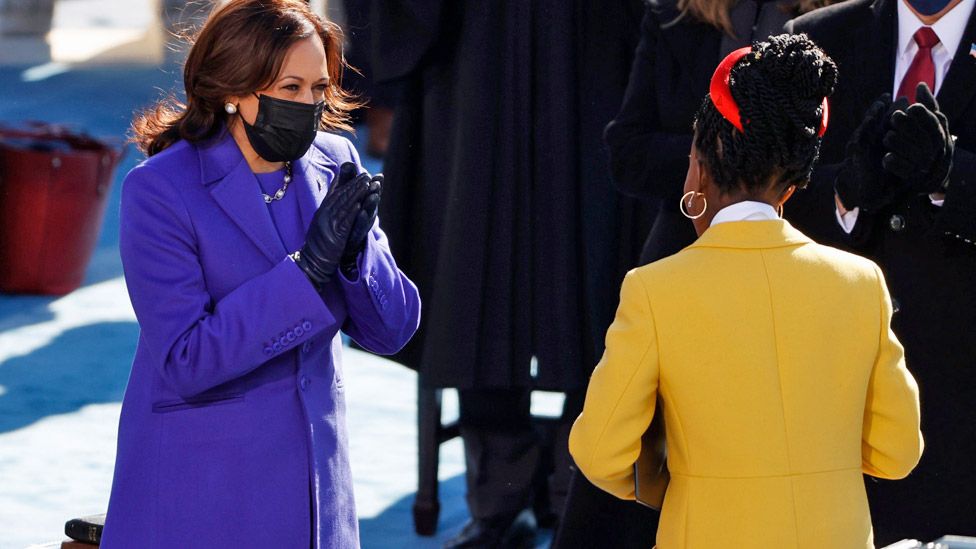 The poet was applauded by Vice President Kamala Harris

In her poem, Gorman described herself as "a skinny black girl descended from slaves and raised by a single mother [who] can dream of becoming president, only to find her self reciting for one".

America's first-ever National Youth Poet Laureate did her job, which was to find the right words at the right time.

It was a beautifully paced, well-judged poem for a special occasion, but it will live long beyond the time and space of the moment.

Amanda Gorman delivered her piece with grace, the words it contained will resonate with people the world over: today, tomorrow, and far into the future.

The writer and performer, who became the country's first National Youth Poet Laureate in 2017, followed in the footsteps of such famous names as Robert Frost and Maya Angelou.

"I really wanted to use my words to be a point of unity and collaboration and togetherness," Gorman told the BBC World Service's Newshour programme before the ceremony.

"I think it's about a new chapter in the United States, about the future, and doing that through the elegance and beauty of words."

US broadcaster and actress Oprah Winfrey tweeted that she had "never been prouder to see another young woman rise".

Also on Twitter, Joanne Liu, the former head of aid agency Médecins Sans Frontières, described the poem as "the most inspiring 5:43 minutes for the longest time".

US politician and rights activist Stacey Abrams said the poem was "an inspiration to us all".

Former presidential candidate Hillary Clinton tweeted that Gorman had promised to run for president in 2036 and added: "I for one can't wait."

Illinois poet laureate Angela Jackson said the recitation was "so rich and just so filled with truth".

"I was stunned that she was so young and so wise," Jackson told the Chicago Sun-Times.

Gorman said she "screamed and danced her head off" when she found out she had been chosen to read at President Biden's swearing-in ceremony.

She said she felt "excitement, joy, honour and humility" when she was asked to take part, "and also at the same time terror".

And she added that she hoped her poem, completed on the day supporters of former President Donald Trump stormed the Capitol, would "speak to the moment" and "do this time justice". 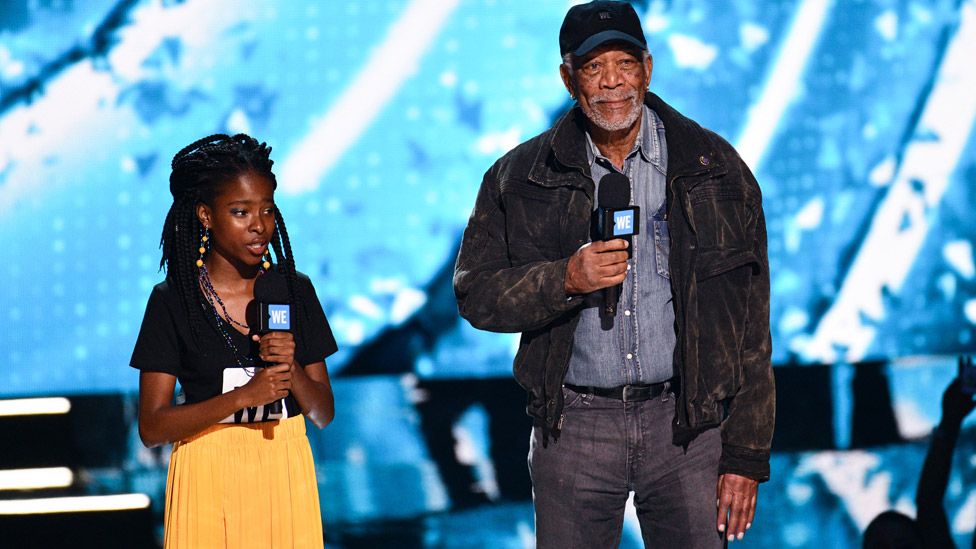 Born in Los Angeles in 1998, Gorman had a speech impediment as a child - an affliction she shares with America's new president.

"It's made me the performer that I am and the storyteller that I strive to be," she said in a recent interview with the Los Angeles Times.

"When you have to teach yourself how to say sounds [and] be highly concerned about pronunciation, it gives you a certain awareness of sonics, of the auditory experience."

She published her first book, The One for Whom Food Is Not Enough, in 2015 and will publish a picture book, Change Sings, later this year.

More in this category: « A wristband that tells your boss if you are unhappy Larry King: US TV legend who hosted 50,000 interviews »
back to top

Kanchana to go to Qatar ; 2 more ministers off to Russia

Man gunned down in Kelaniya