What’s your “Sri Lanka” you wish for?

Completing 73 years of “Independence” on 04 February, Sri Lanka was left with “songs of praise” sung with no attention given to their meanings. While radio channels and TV stations projected Sri Lanka as the “most noble nation on earth”, this country remains a brutally and a shamelessly divided country. Minority Tamils and Muslims are not treated with due respect and dignity while the State takes pride in representing Sinhala Buddhists. There is unrestricted, continued destruction of environment everywhere carried out with political power. State agencies go blind over ravaging forests and wildlife sanctuaries. Law and order often decided politically, people now hesitate to accept the judiciary as their last resort for justice. Inefficient and corrupt public administration intimidates public life, and the political system is anything but mega corrupt.

“Celebrating independence” is to endorse all that rotten social life that accumulated a massive debt of 2.3 trillion dollars no government would be able to payback within this free market economy. With COVID-19 pandemic making economic life far worse, getting Sri Lanka economically back on its feet is a major challenge. Crumbling economy and the ever-towering debt, has left Sri Lanka in tight geo-political conflict between China and US led Western power bloc, and India as a concerned neighbour.

Rajapaksas back on the saddle of power announcing in February 2020 Sri Lanka’s withdrawal from UN Resolutions 30/1 and 40/1, the UNHRC has once again come with a damning report on accountability, impunity, human rights violations and war crimes committed. It has clear indications the UNHRC has no faith in domestic mechanisms for investigations and inquiry. Everything added, it is a daunting task for any government to now take responsibility in finding stable answers to save Sri Lanka’s future.
With the crumbling economy clawing daily life, all other political issues have lost importance, and “expert advice” is focussed on getting back to “normalcy” that for most is where SL was before the COVID-19 pandemic. Thus, reducing everything to economics, what is the society expecting as answers to this complicated and complex crisis? Do they have any idea as to what Sri Lanka’s shared future should be? 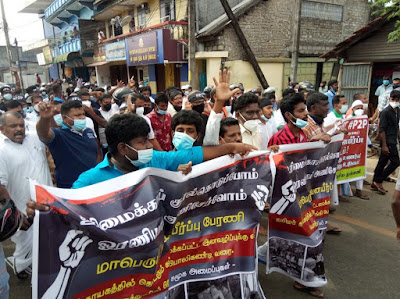 There seems no difference between different social segments in their perceptions of future SL. Almost all have turned selfish and there is truly little thinking of a “collective future”. Urban or rural, middleclass or low down, they all speak of their own issues and have no time for “others”. For the poor, it is about their day-to-day life. They certainly lack intellectual capacity and information to think “differently” and think about answers for the future. The more educated urban middleclass also don’t have any interest in “socio economic development” that can provide answers for all what they grumble about. In simple language, the urban middleclass is the most selfish social segment, despite their ability to think beyond today and in collective form.

“Tomorrow” lost its importance and social relevance after JRJ’s free market economy. Two generations lived through it since 1978 and the third in this new millennia are racing for “personal success” in crazy consumerism. “Success” is never defined within this free market economy in terms of quality and standard of life in a democratic society. Fundamentals of free market economies want governments to keep the “State” out of its business and that leaves governments outside defining and planning “development” for People.

Fact remains, despite all ignorance, disrespect and disregard for a “better collective tomorrow”, we need to find answers for a future that will ensure our independence and sovereignty. Answers in creating a society that accepts and respect “cultural diversity”, save and conserve our environment, forests and wildlife sanctuaries, lift us out of debt and keep us free from international probes and geo-political conflicts. That totality can only be assured with “development and democratising of the State”.

Changing of “leaderships”, looking for new “leaderships” to run this dilapidated and decayed society has been a waste of effort and time. New or old, within this nauseatingly corrupt free market economy that holds no morals and decency, all politicians hold on to privileges they decide for themselves in a parliament that is no more than a rowdy gathering. Within this politico-economic system politicians of all colour and all ages are “agents” of filthy rich business dealers who decide profits. Changing of leaders thus have never been an answer.

We are therefore left to open the discussion for an alternate approach for a new and a shared future. That needs some direction towards new “development”, very much different to what Sri Lanka came through 40 years. That also compels us to first decide what “development” is, that we want.

“Development” is about creating a society that accepts and respects cultural diversity with equal opportunities for all People to improve their standard of life with quality and dignity. Development therefore should provide better infrastructure, better services, better incomes, more free time for leisure and cultural activities, freedom and dignity in life with equal opportunities and equal access to resources. It may have different models for different societies, but in debt ridden poor countries the State is held to be politically independent and responsible for providing all citizens equal opportunities and equal access to essential services and resources.

Two major changes are therefore needed immediately in economy and in education to begin such far reaching reforms all round. Economy is not about tax regimes, bank interests, trade tariffs and the “stock market”. Economy should also not depend on FDIs manufacturing for profits in the global market. Including market behaviour, the economy has to be planned and regulated, very much different to the ’70 era of “rations and queues”. Whatever investments called for, should be for clearly identified areas that would strengthen national and rural economy as identified within a “National Development Policy” (NDP) declared publicly and endorsed by the People.

NDP should focus, lay stress and work towards establishing our national economy as part of and within the South Asian market. Politically, this needs a government leadership that can negotiate a new “Democratic South Asia”, not one that reacts to geo-political demands. To be economically and culturally within a functional democratic region, provides us the political compulsion to remain as a secular, plural nation too.

To be part of a democratic, secular region with historically established cultural diversities, Education must be seriously reformed to produce rational minded future generations. Over decades, education has robbed the capacity of students to think rationally. Very much proved with all the hype created around “fake” cures for COVID-19 virus that had professionals and unskilled labour alike, queueing up. “Free education” within this mess is just habitual talk today. The term “free” is a total misnomer in national education. “Kannangara Educational Reforms” never proposed education for “free”. What is still called “free education” is a politicised educational network of 10,000 plus schools with over 240,000 teachers that keeps urban poor and rural children “literate” with only educational certificates.

Serious reforms should begin with, all 350 plus “National” schools turned into “fee levying” public schools. More popular national schools within municipal council limits, should be placed at the high end of fee levying. Grade V scholarship should be scrapped and replaced by a scholarship that covers university education as well, offered to the best students at G.C.E O/L exam from non-fee levying schools in every district. Fee levying private schools under whatever label, should only be allowed to tutor children within the “national education system” and not for what they decide for profits.

School structure beginning from pre-school, syllabi, curriculum, teacher recruitment and training, tertiary and university education, adult and aesthetic education and everything else related to national education should be submitted to social dialogue as a “White Paper on Educational Policy”, before adopting it.

So is public transport that JRJ ruined in 1979 by bringing in micro and small investments into public transport. Integrated public transport need to be re-introduced as a provincially and nationally organised essential service, managed as efficient, comfortable and affordable public enterprises.

All these would lead to far reaching, serious reforms that would change the entire socio-economic landscape and also in how People think about “the other”. They would demand major changes in democratising the State with “people’s participation” for policy and decision making at local government and provincial council level.

Now, if anyone asks me “What’s your ‘Sri Lanka’ you wish for?” my answer is simple. It is where People in a secular, plural society decide what they collectively need to prosper and work towards achieving it with “State Power” shared at local and provincial levels. Where politicians come in as elected “legislators” there are conditions attached. “Right of Re-call” being fundamental. All these certainly need a very serious social dialogue. A responsibility we cannot keep dodging or postponing. Protests on “Independence Day” by Tamils and Muslims in North-East demanding justice and life with dignity and by Sinhalese in agri-society demanding an end to environmental destruction and security to life, say it all.

More in this category: « Reminiscing Maxwell Mendis, Mendis Foursome “P2P” and mis-read Rajapaksa on “burials” »
back to top