Donald Trump's victory in the US presidential contest could change America's relationship with the rest of the world in some important ways. Here are five of them. 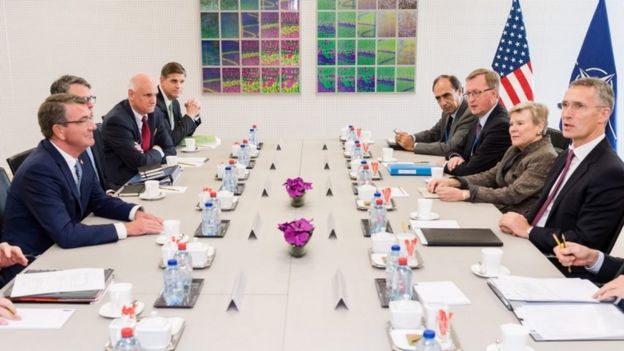 Nato defence ministers meet - could the US flag disappear next time?

Mr Trump has been hugely critical of Nato (the North Atlantic Treaty Organization), a cornerstone of American foreign policy for more than 60 years.

He has attacked the organisation as obsolete and characterised its members as ungrateful allies who benefit from US largesse. He says America can no longer afford to protect countries in Europe - and in Asia - without adequate compensation, suggesting he would withdraw American forces unless they pay up.

In one sense, he is simply voicing longstanding US concerns about most Nato members not meeting their goal of spending at least 2% of GDP on defence, while US defence spending is the largest in the world. He also stressed in a presidential debate he was "all for Nato".

But his stance has sparked alarm, particularly in eastern Europe which sees the alliance as a bulwark against Russia. 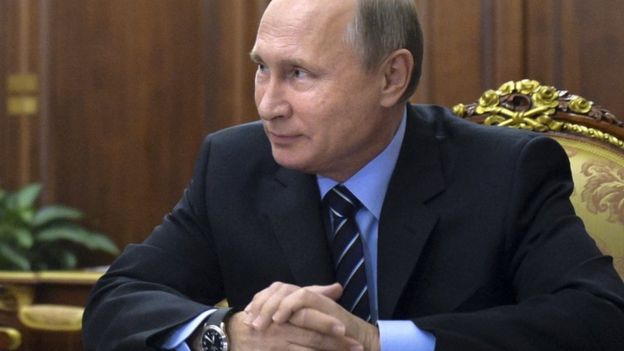 As for Russia itself, Mr Trump has said he believes he can ease tensions with President Vladimir Putin, and has praised him as a strong leader with whom he would love to have a good relationship.

Barack Obama began his presidency calling for a "reset" with one of the US' long-term rivals. Since then Russia-US ties have been strained, no more so than over the two countries backing rival sides in Syria's civil war.

Mr Trump has said little about what better relations might involve beyond a desire for a joint fight against the militants of so-called Islamic State.

But he intends to find out if the Russians would be "reasonable", confident that he could better command Mr Putin's respect than Hillary Clinton or President Obama.

Free trade deals may be canned 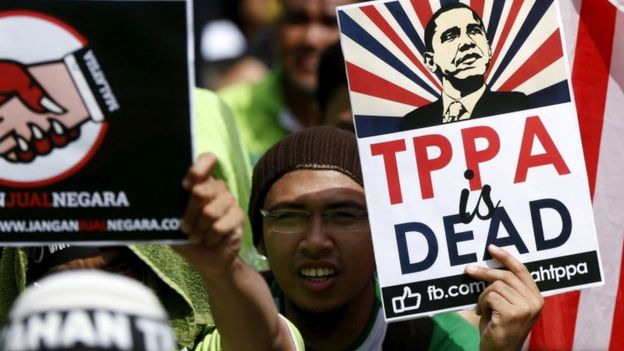 There has been strong public opposition to free trade deals

Donald Trump's trade policies would amount to the single biggest change to the way America does business with the rest of the world in decades.

He has threatened to scrap a number of existing free trade agreements, including the North American Free Trade Agreement between the US, Canada and Mexico, which he blames for job losses. He has even suggested withdrawing the US from the World Trade Organization.

He is also in favour of taxing imports, and has talked about imposing tariffs of 45% on China and 35% on goods shipped from Mexico, in an effort to prevent companies moving jobs south of the border.

Iran nuclear accord could be rethought 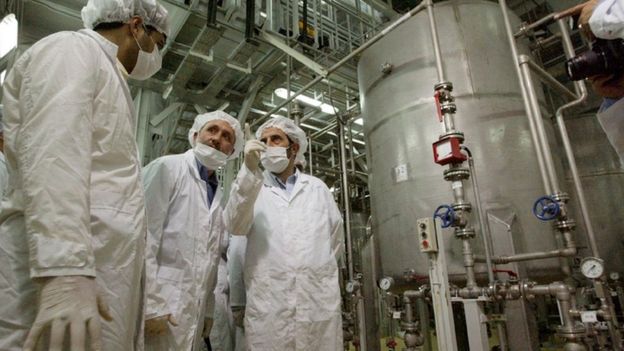 The Iranian nuclear accord was the "worst deal I think I've ever seen negotiated", said Mr Trump

For President Obama, the deal that saw sanctions against Iran lifted in exchange for guarantees it would not pursue nuclear weapons was a "historic understanding".

But for Donald Trump, echoing Republican concerns, it was "the worst deal I think I've ever seen negotiated". He has said dismantling it would be his "number one priority".

Doing so would potentially have a huge impact on the Middle East, with Iran a key player in the Syrian conflict and a rival of Saudi Arabia and Israel, for instance.

Already Iran's Foreign Minister Javad Zarif has urged Trump to stay committed to the nuclear deal. He suggested the US would have to respect the accord given that it was thrashed out with several world powers. 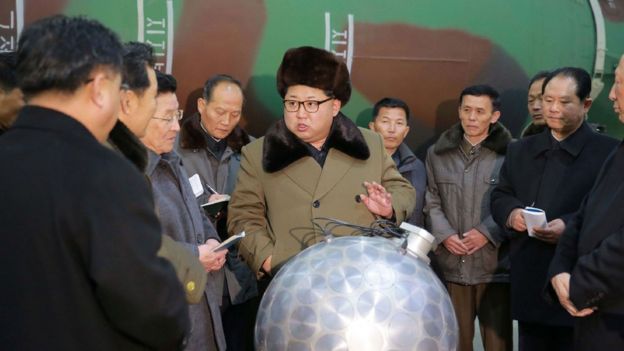 How will Donald Trump handle this man - Kim Jong-un?

Japan and South Korea have both been singled out by Mr Trump for relying too much on the US. He has even said they would benefit from having their own nuclear arsenals.

Then there is the region's renegade state, North Korea, which is currently developing its own nuclear weapons.

Mr Trump faces the task of curbing those ambitions, something that has eluded successive US leaders.

How he might do this is unclear - in the past year Mr Trump has both called North Korean leader Kim Jong-un a "bad dude" but also said he would directly negotiate with him.

(Except for the headline, this story, originally published by BBC News has not been edited by SLM staff)

Last modified on Friday, 11 November 2016 10:16
More in this category: « Pundit Amaradeva & Sinhala Song ; A different perspective When you let go so you can belong and keep forever »
back to top

Consumers drink water and only look at the food  - Asela