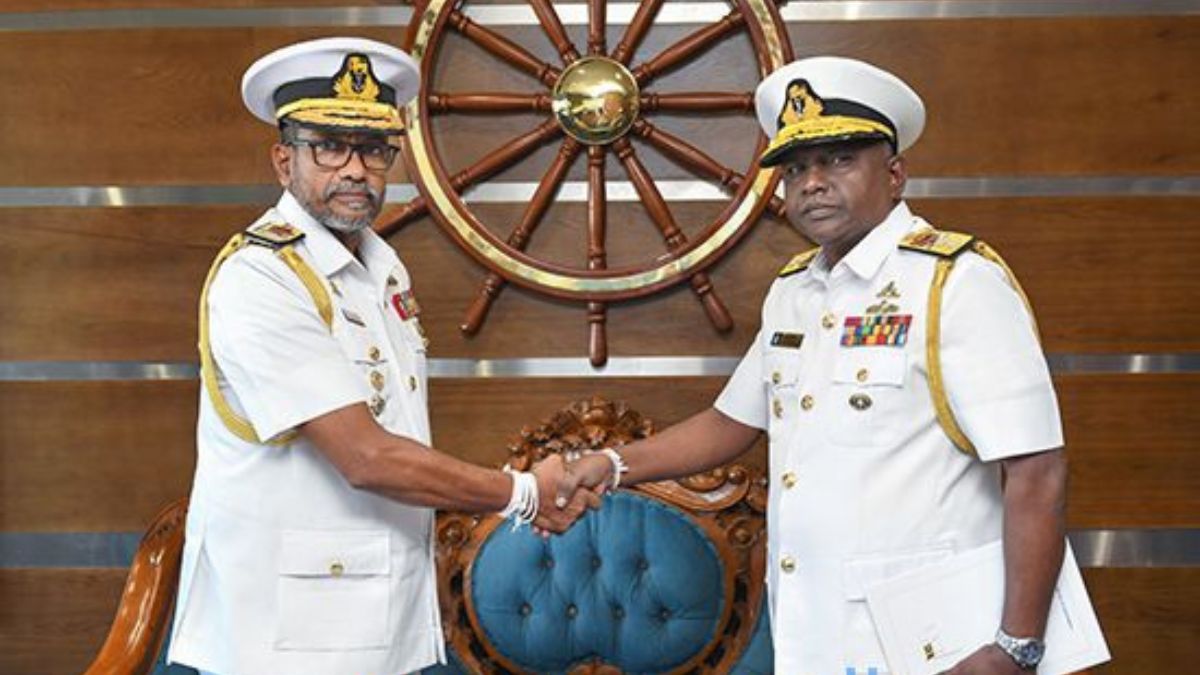 Commander of the Navy, Vice Admiral Priyantha Perera formally handed over the letter of appointment in this regard to Rear Admiral Jayantha Kularatne at the Navy Headquarters today (Jan. 03) and expressed his best wishes to the newly appointed Chief of Staff.
Rear Admiral Jayantha Kularatne is a proud product of Mahanama College, Colombo. He has amply exhibited excellence in curricular and extracurricular activities during his school days as a college senior prefect, member of school cadet platoon as well as an athlete. He joined the Sri Lanka Navy in 1987 as an Officer Cadet of 16th intake, in the Executive branch. On successful completion of his basic training from the Naval and Maritime Academy, Trincomalee, he was commissioned as a Sub Lieutenant on 15th June 1989. The senior officer completed his Sub Lieutenant Technical Course at the Naval and Maritime Academy in 1990 and specialized in Long Navigation and Directions at the Navigation and Operations School, Pakistan Navy in 1999. Progressing steadily in his career, the senior officer was elevated to the rank of Rear Admiral on 07th August 2020.

He has successfully completed the Naval Command and Staff Course from the Defence Services Staff College, Wellington in India in 2004/2005. He holds a Master’s Degree in the Defence and Strategic Studies from the University of Madras in India and also has a Master’s in Maritime Policy from the University of Wollongong, Australia in the year 2017. In addition, the senior officer has completed a Diploma in Conflict Resolution at the Bandaranaike Centre for International Studies in Colombo.

He has been awarded the Rana Soora Padakkama (RSP), a gallantry medal, twice for his conspicuous bravery. He has also been awarded the Uththama Sewa Padakkama (USP), for his unblemished character and devotion to the duty. In addition, Rear Admiral Jayantha Kularatne has been issued 03 Letters of Commendation by Commanders of the Navy for outstanding performance of the duty and exceptional contributions to the naval service.

Rear Admiral Jayantha Kularatne has also been awarded the ‘Shasanabhiwurdidayaka Deshamanya’ title from the Amarapura Maha Sangha Sabha for his contribution to the promotion of Buddhism.

Rear Admiral Jayantha Kularatne is married to Mrs Udeni Kularatne and they are blessed with a son Asel Kularatne.