WHO experts slam NYT report  saying they were 'misquoted'

Scientists from the World Health Organization (WHO) recently refuted claims in a New York Times article that Chinese scientists refused to hand over important data during their trip to China to study the origins of the COVID-19 virus.

The New York Times' accusation distorting the truth with their quotes "intendedly twisted," criticized the team members. Instead, they said their research work in China was supported by "trust and openness" with critical data gained throughout the visit.

"This was NOT my experience on WHO mission. As lead of animal/environment working group I found trust and openness with my China counterparts. We DID get access to critical new data throughout," Peter Daszak, zoologist and member of the WHO-China research team, wrote on Twitter.

He added that new data including environment and animal carcass testing, suppliers to Huanan seafood market, analyses of mortality in Hubei Province, and early cases are "all in a report coming soon," just as WHO Director-General Tedros Adhanom Ghebreyesus said on Friday's press conference in Geneva that two reports on the WHO mission's findings are to be released soon and publicly. 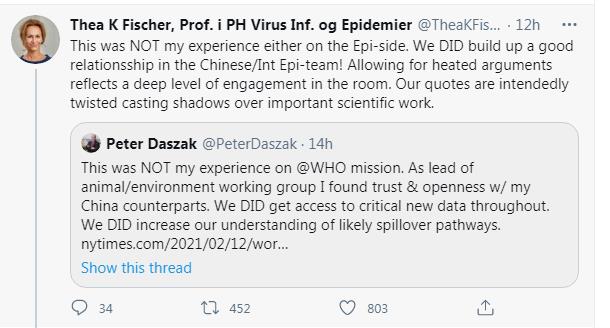 Another expert on the panel echoed his comments. Replying to the thread, Thea Kolsen Fischer wrote, "This was NOT my experience either on the Epi-side. We DID build up a good relationship in the Chinese and International Epi-team! Allowing for heated arguments reflects a deep level of engagement in the room. Our quotes are intendedly twisted casting shadows over important scientific work."

Responding to Fisher, Daszak tweeted, "Hear! Hear! It's disappointing to spend time with journalists explaining key findings of our exhausting month-long work in China, to see our colleagues selectively misquoted to fit a narrative that was prescribed before the work began. Shame on you @nytimes." 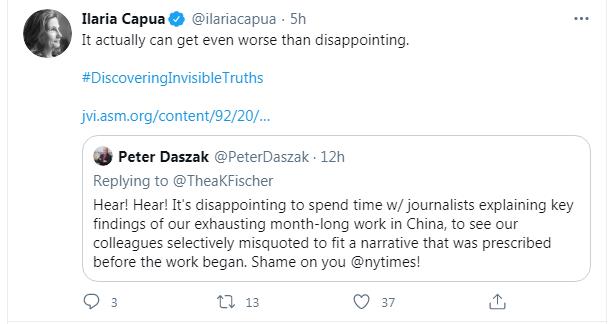 Ilaria Capua, professor at the University of Florida, retweeted Daszak's, saying, "It actually can get even worse than disappointing."

In an earlier virtual interview with CGTN's anchor, Daszak said he respects the work the Chinese scientists have done in Wuhan and said the team had "good, open, honest discussions, really got into every detail" with their Chinese counterparts, and they got "really deep understanding" with "a lot of transparency."

Also contradicting certain media's reports, Peter Ben Embarek, head of the WHO mission, said at Friday's press conference that the international team's visit to China has been "successful in many ways," with a lot of new knowledge made about the start of the event and understandings deepened in the fields, including the spread of the virus, virus genome sequencing and wildlife tracing.

U.S. should support WHO with 'real actions'

China is welcoming the U.S. return to the WHO, but says the country should "hold itself to the highest standards with a serious, earnest, transparent and responsible attitude" instead of pointing fingers, according to a statement from the Chinese embassy in Washington on Sunday.

It urged the U.S. to "shoulder its rightful responsibility, support the WHO's work with real actions and make due contribution to the international cooperation on COVID-19."

(Except for the headline, this story, originally published by CGTN has not been edited by SLM staff)